The Opry Heads To The Movies 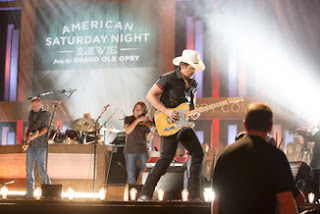 Nashville- (October 1, 2015) — The show that made country music famous is set to take some of the genre’s most popular artists to the big screen in December when its first feature film, American Saturday Night: Live From The Grand Ole Opry, previews in theaters across America. The made-for-cinema concert film captures on-stage Opry performances and backstage moments with Opry members Brad Paisley, Blake Shelton, and Darius Rucker, as well as country favorites The Band Perry and Brett Eldredge.

American Saturday Night: Live From The Grand Ole Opry is set for a limited special engagement at select Carmike Cinemas in the US beginning December 4. Distribution across America will follow in January in partnership between the Opry and independent distributor DigiNext, a joint-venture of Carmike Cinemas, a leading motion picture, alternative programming and 3-D motion picture exhibitor.


“We are excited about the opportunity to take the Opry and country music into movie theaters across the country,” said Steve Buchanan, Opry Entertainment President.  “This partnership allows us to present the Opry to fans through a previously unutilized medium and is another way for the Opry to expand its reputation as a vehicle of discovery for America’s music.”

The film will give audiences a virtual front row seat and VIP all-access pass.  Among the performances featured:

--The Band Perry performing “If I Die Young,” the same song the band sang for Opry management in a backstage dressing room in 2009, earning an invitation to make its Opry debut

“Everyone in the audience was swept away by each artist’s incredible performance,” said Bud Mayo, Managing Member of DigiNext and President of Carmike’s Alternative Programming and Distribution Division, who attended the live taping on August 31 with Carmike CEO David Passman. “The Opry production was the best I have seen and heard in 40 years in this business. Add the personal interactions with the artists between their sets and moviegoers are in for a thoroughly immersive experience from the moment they do their virtual walk into the hallowed halls of the Opry. This kind of groundbreaking event helps to fulfill the promise of digital cinema and its importance to Carmike and the exhibition industry at large.”

The Opry is set to celebrate its landmark 90th birthday this weekend (October 2 – 3) in Nashville, Tennessee. Country superstars Little Big Town and Carrie Underwood are among those scheduled for weekend performances, while shows later this month will feature Miranda Lambert, Alan Jackson, Alison Krauss, Loretta Lynn, and The Charlie Daniels Band, among others.