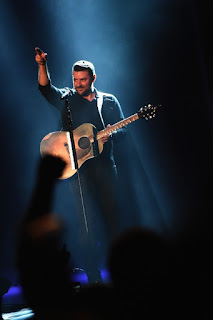 September 30, 2015…Nashville, TN…Just days after returning stateside following the sold-out European leg of his “I’m Comin’ Over” World Tour, RCA Records artist Chris Young headlined a hometown show at Nashville’s Ascend Amphitheater to kick off his U.S. concert tour in front of a crowd of over 5,000 fans.

“I was both excited and anxious to come home and play a show in Nashville. I knew I was going to have a lot of friends and family in the audience so I didn’t want to screw up” joked Young. “The audience at Ascend Amphitheater blew me away and I could have kept playing all night long.”


His first headlining show in Music City since 2012, Young played an electrifying, hit-packed 75-minute set for the cheering crowds, including chart-toppers “Tomorrow,” “You,” “Voices,” “Gettin’ You Home,” “The Man I Want To Be” and “Who I Am With You.” The Middle Tennessee native surprised the crowd midway through his set, inviting friend and country superstar Brad Paisley to join him on stage to perform Eric Clapton’s “Change The World.” Chris channeled Conway Twitty during “I Can Take It From There” and the audience erupted for “I’m Comin’ Over,” the title track to Young’s upcoming album, due November 13.  Prior to taking the stage, Sony Music Nashville presented Chris with a plaque celebrating the single’s recent RIAA Gold certification.

Labelmates Jerrod Niemann and Cam joined Young for the Nashville show, with Eric Paslay and Clare Dunn accompanying Chris for fourteen shows October through December. For a complete list of tour dates and to purchase tickets to catch the CMA, ACM and Grammy-nominated hit-maker in concert, visit ChrisYoungCountry.com.