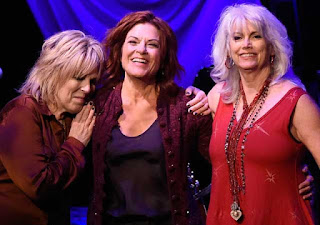 NASHVILLE, Tenn., – Sept. 4, 2015 – The lives and careers of Rosanne Cash, Emmylou Harris, and Lucinda Williams have intersected for decades. But the three veterans had never shared a stage before—until last night (Sept. 3, 2015).
Cash recruited her fellow Southern roots-music queens for the second of her three concerts as the 2015 artist-in-residence at the Country Music Hall of Fame and Museum. There were tears, simply because the principals were so happy to share the evening; there were stories, some that had never been told, and will never be told again; there was mutual praise a-plenty, as each testified as to how much inspiration she had derived from the others’ work; and, most of all, there was music, with all three women reaching deep inside themselves to find the core creative sparks that have made them such enduring American artists.
“The title of this show,” Cash quipped at the outset, “is ‘life is short, spend some time playing with your girlfriends.’” The trio played for a rapt, sold-out crowd of 800 in the museum’s CMA Theater. “We’ve done shows where we get up and sing with each other for a song,” Cash continued. “We talk backstage at events. We’ve been at festivals and have just missed seeing the other’s set. But we’ve never done a show, the three of us together. This is so special for us.”
Performing in the Nashville tradition of a guitar pull, the three women sat on stools in a line, at the front of the stage, with nothing but acoustic guitars and microphones. They were accompanied by Cash’s husband and producer, John Leventhal—“the band,” as she described him. For a complete wrap-up of last night’s show click here.
Established in 2003, the museum’s artist-in-residence program annually honors a musical master who can be credited with contributing a large and significant body of work to the canon of American popular music.  Honorees are given a blank canvas and are encouraged to lend their own creative brushstrokes to an up-close-and-personal musical experience. Previous Artist-in-Residence honorees include Cowboy Jack Clement, Earl Scruggs, Tom T. Hall, Guy Clark, Kris Kristofferson, Jerry Douglas, Vince Gill, Buddy Miller, Connie Smith, Kenny Rogers, Ricky Skaggs, and Alan Jackson.
“It’s been an incredible honor to be the artist-in-residence for this institution, in this magnificent structure, and with this wonderful staff, who have curated one of the most incredible collections in the world,” Cash said. “It’s a world-class museum, and we’re so lucky to have it. I’m so grateful that so many of my own family’s artifacts and history are in the archives here, for safekeeping forever and ever.”
Cash returns for the third and final performance of her residency on Sept. 24. The evening will feature husband, producer, guitarist, co-writers, and creative partner, John Leventhal in the museum’s intimate, 213-seat Ford Theater. The program is sold out.