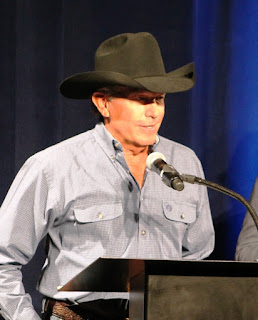 The “King of Country Music” to play Las Vegas Arena on December 2 and 3, 2016; tickets for all dates to go on sale to the public Friday, October 2

NASHVILLE, Tenn. (Sept. 29, 2015) – As soon as George Strait announced that he would be taking the stage for select dates at the Las Vegas Arena in 2016, fans started lighting up social media with their plans to see the “King of Country Music” perform in Sin City. Due to overwhelming demand for the four shows announced last week, Strait will be adding December 2 and 3, 2016 to the schedule.

The Country Music Hall of Fame inductee will be among the first entertainers to perform at the Las Vegas Arena, with a series of exclusive worldwide concert engagements on April 22, April 23, September 9, September 10, December 2 and December 3, 2016. GRAMMY, ACM and CMA Award-winning singer/songwriter Kacey Musgraves, who recently released her second studio album Pageant Material to critical acclaim, will open for Strait on all dates.

“I said all along I wasn’t going to tour anymore, but I also said that I wasn’t retiring by any means and I still wanted to do some dates,” said Strait. “I’m very excited to be coming back out and playing for the fans out there. I’m looking forward to it so much, singing those songs that I love so much and haven’t done in a while. I’m really, really looking forward to being able to play in the new Las Vegas Arena. I hear it’s just unbelievable. I can’t wait.”

Rick Arpin, senior vice president of entertainment and development for MGM Resorts International, said, “We always knew George was the King of Country, but the unprecedented fan reaction following last week’s announcement has been incredible.  It is exciting to be able to offer fans worldwide two additional opportunities to see this exclusive engagement during the National Finals Rodeo. These performances will add to the star power of the Las Vegas Arena’s opening season.”

Strait’s new album, Cold Beer Conversation, is available now at Apple Music and Walmart and features 13 songs including his latest single, “Cold Beer Conversation.” It is the first new studio album in two years from the MCA Nashville recording artist. His last studio album was the Gold-certified Love is Everything, which featured the Platinum-certified No. 1 hit (and 60th No. 1 hit of his career) “Give It All We Got Tonight” as well as the Gold-certified hit “I Got A Car.” Strait also released The Cowboy Rides Away: Live from AT&T Stadium CD and DVD in 2014, celebrating his mega-successful, two-year final tour.

Tickets for the 2016 concert series will go on sale Friday, Oct. 2 at 10:00 a.m. PT via www.straittovegas.com and range in price from $75 to $200 plus applicable fees. American Express® Card Members can purchase tickets for the December 2 and 3 shows before the general public from now until Thursday, Oct. 1 at 10 p.m. PT.