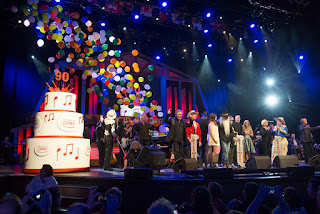 After a surprise on-stage collaboration between The Oak Ridge Boys and Little Big Town on the Oaks’ classic “Elvira” Friday night, both groups were presented Opry member 90th anniversary member gifts by Opry Vice President and General Manager Pete Fisher. “For 90 years, Opry members have been the heart and soul of the show that made country music famous,” Fisher said. “Moments like these connecting generations of great country artists are what the Grand Ole Opry is all about.” The gifts to be presented to all members over the next few months are replicas of new backstage artwork unveiled Friday night in honor of the Opry’s membership.

On Saturday, one of America’s most trusted and beloved journalists and long-time country music and Grand Ole Opry fan Robin Roberts trekked to Nashville for the 90th anniversary celebration. The Good Morning America anchor introduced superstar and Grand Ole Opry member Carrie Underwood, who celebrated alongside a bevy of Opry members including The Oak Ridge Boys, Larry Gatlin and the Gatlin Brothers, Trace Adkins, and more.

Throughout the weekend, fans packed the Opry Plaza for free performances including an Opry salute by stars of ABC’s NASHVILLE—Charles Esten, Sam Palladio, Chris Carmack, and Aubrey Peeples.