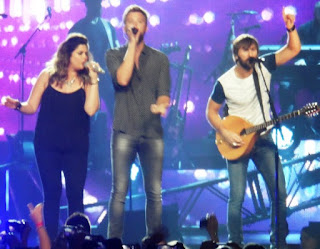 New York, NY (October 26, 2015)--Eagle Rock Entertainment is proud to announce the November 13 release of the Lady Antebellum: Wheels Up Tour on DVD, Blu-ray and digital formats [MSRP $19.98 Blu-ray, $14.98 DVD]. A DVD+CD package will also be available exclusively though Walmart.


This fantastic concert film was shot this year at the Irvine Meadows Amphitheatre in Irvine, California on June 27th. The Wheels Up 2015 Tour set showcases tracks from the band’s most recent album 747, alongside hit singles and fan favorites from across their career, including “American Honey,” “Need You Now,” “Bartender,” “Our Kind Of Love,” “Just A Kiss,” “I Run To You,” “We Owned The Night,” “Dancin’ Away With My Heart,” “Compass,” “Love Don’t Live Here,” and many more!
The seven-time Grammy-winning act has amassed a multitude of hits and an incredibly loyal fanbase worldwide. Lady Antebellum’s Wheels Up 2015 Tour started in Oslo, Norway at the end of February and traversed Europe, Australia, and North America before it concluded in Las Vegas, at the beginning of October. Scattered between the live songs, the film features behind-the-scenes snippets, highlighting the band meeting fans, the spectacular set design and intimate moments on the tour. It’s the ultimate Lady Antebellum tour experience, fully immersing viewers in their life on the road.
Click here to view “Need You Now”: https://youtu.be/oDLqi61lrWo.
The Wheels Up Tour DVD and Blu-ray is available for pre-order at:
DVD: http://smarturl.it/LadyAWheelsDVD
BR: http://smarturl.it/LadyAWheelsBR