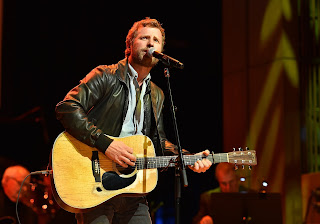 Country's Top Stars Honor The Legends at the Hall of Fame

Garth Brooks, Trisha Yearwood, Dierks Bentley, Steve Wariner, and more were on hand Sunday night to pay tribute to the newest members of the Country Music Hall of Fame & Museum.


Garth & Trisha performed a touching ballad, "I'll Be True To You," in honor of the Oak Ridge Boys, who took that song to #1 in 1978.  The husband & wife sang the song with just Garth playing his acoustic guitar, and got a standing ovation. Both Garth & Trisha had fond memories of the Oak Ridge Boys.  Trisha said, "We were both in high school when they were making it big, and that music, my sister & I sang their songs, so they were a huge influence on me, and Garth feels the same way." Garth added, "These are the first guys to cut Callin' Baton Rouge, and they allowed me to open their arena shows in the Northeast.  They continue to be an influence on my stuff, and my career.  But with the Hall Of Fame, who's ever going in, it's well deserved and long overdue, with one exception."

Dierks Bentley performed "Pop A Top" for the late Jim Ed Brown.  Before the show, he spoke to reporters on the red carpet:  "I'm honored to be here to talk about Jim Ed Brown, or to sing for him, a song I love, Pop A Top, one I sang a bunch as a cover song back in the day.  Jim Ed was so warm and welcoming to me when ever I played the Opry.  He'd come in the dressing room and joke around.  A great person and a great singer.  Luckily he'll be here forever in the Hall Of Fame."