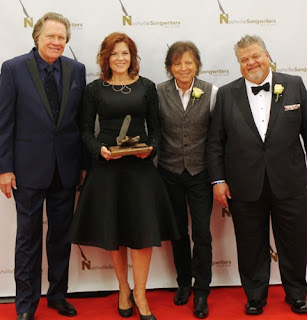 NASHVILLE, TENN. (October 11 , 2015) - Rosanne Cash, Mark James, Even
Stevens and Craig Wiseman were officially inducted into the Nashville Songwriters
Hall Fame last night. The four took their bows in front of a sold-out industry crowd of
more than one thousand at NaSHOF's 45th Anniversary Hall of Fame Gala held at the
Music City Center. The event celebrated the musical contributions of their newest
inductees through star-studded performances of some of their biggest hits.

Each inductee was honored with a special segment that featured performances of his or
her songs by some of music's most talented artists, as well as the official induction into
the Nashville Songwriters Hall of Fame by someone who has played a vital role in their
career.

Even Stevens was inducted by Hall of Fame songwriter Hugh Prestwood. Loving
Mary performed "Drivin' My Life Away' and American ldol alum Paul McDonald treated
the audience to 'When You're ln Love With A Beautiful Woman,"

The evening also featured a special presentation to John Van Mol, founder and board
chair of DVL/Seigethaler. in appreciation for his efforts to create the Nashville
Songwriters Hall of Fame Gallery at the Music City Center.

ln addition to the inductions by the Nashville Songwriters Hall of Fame, the evening also
featured presentations from another organization, the Nashville Songwriters Association International (NSAI), which presented its annual Songwriter Achievement Awards.
The association's professional songwriter members voted "Girl Crush" (written by
Hillary Lindsey, Lori McKenna and Liz Rose / recorded by Little Big Town) as their Song
of the Year. The writers accepted their award and also peformed the song.

The Songwriter/Artist of the Year was presented for a record-breaking seventh time in
nine years to Taylor Swift, who scored self-penned hits of her own such as "Bad
Blood," "Blank Space," "Shake lt Off" and "Style."

Besides honoring the Song, Songwriter and Songwriter/Ar1ist, the writers of NSAI's
Professional Songwriters Division also singled out 10 songs and their writers for the
organization's 2015 awards, informally dubbed "The Songs lWish l'd Written."