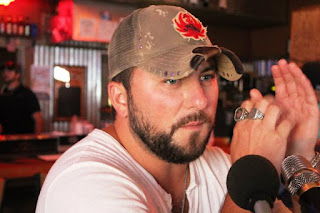 TYLER FARR GOES ON IMMEDIATE VOCAL REST
FOLLOWING MICROLARYNGEAL SURGERY
Nashville, TN – Following microlaryngeal surgery to remove a vocal polyp on his vocal chords, Columbia Nashville post modern country traditionalist Tyler Farr has been placed on total vocal rest. The power vocalist first became aware of vocal issues while on tour with Jason Aldean this summer – and the problem was identified during a severe bout of bronchitis at the end of 2015.

“This is the last thing I would’ve ever expected,” says the operatically-trained Farr. “I sing hard, and I give it everything I have every night, but I really believed I was putting my training to work. After a #1 song, an awesome tour with Jason and getting engaged, this is not how I thought I was going to be winding up 2015.”
Rather than wait and see, Farr and his medical team opted to remove the polyps and begin vocal rest, followed by aggressive therapy. To maximize recovery and minimize time off the road, the Missouri-born owner of three gold and one platinum single is cancelling all shows for the next few months.
“I know what it takes to get out there and really deliver,” Farr says. “I hate cancelling shows, especially the upcoming tour with my buddy Lee Brice, but I never want to give the fans less than everything... And I know the sooner I let my body heal, the sooner I can get back out there – and the fewer problems I will have in the long run. To me, it’s never about the next few days, but doing the right thing overall, and now I’m under doctor’s orders.”
Working with the medical team at the Vanderbilt Voice Clinic, Farr will be doing all he can to heal his vocal chords and gearing up for the road this spring.  Being given a good report post-surgery, it appears his voice will return stronger and richer than ever.