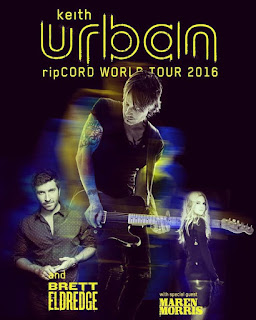 Keith Urban has announced his first arena/amphitheater tour in two years! Urban's "RipCORD World Tour 2016" will kick off on June 2 in Kansas City, Missouri, and will feature special guests Brett Eldredge and Maren Morris along for the ride.  The tour has more than 50 U.S dates scheduled through November, with additional legs set to be announced. Tickets in select markets will go on sale January 29, with more ticket on sales becoming available locally within the next few weeks. Keith says he can't wait to kick off the new trek, which is in support of his forthcoming studio album, Ripcord. Urban shares, "I'm seriously chomping at the bit to kick off this tour. We'll be playing a lot of new music from RipCORD, all new production, new cities where we've never played…and Brett Eldredge and Maren Morris?  It's gonna be potent and unbridled!"


Eldredge, who was a fan of Keith's long before he ever pursued music, says he can't wait to join him on the road. Brett says, "(Urban) is an absolute powerhouse on stage - unlike anyone I've ever seen and to top it all off, one of the most down to earth people I know! The Ripcord tour is gonna be on fire! Get ready!" Morris echoes Eldredge's sentiments and says she was floored when Keith asked her to join him on tour. She shares, "I've personally been a fan of his for as long as I can remember. This is my first tour at this level, and I can't think of a more respected writer, artist, and musician to join for it. It's going to be an absolute blast!"