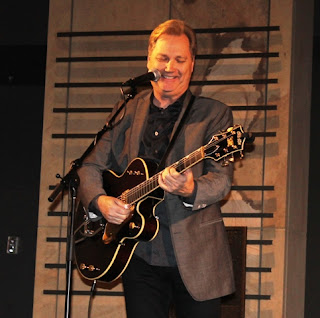 It's been 20 years since Steve Wariner released his instrumental album No More Mr. Nice Guy.  Now the Grammy winner says he's working on a long-awaited sequel.  Inside Country caught up with Steve at the Country Music Hall of Fame & Museum:  "I'm working on a new project that's gonna be kind of like an album I did a few years ago called No More Mr. Nice Guy where a lot of my friends come in.  Peter Frampton already said he wants to play on it.  I talked to Ricky Skaggs about a project, not specifically this one.  But back when I did the first one, he said 'Thanks a lot.' I go what?  He said, 'You didn't ask me to play on your record.'  Ricky's one of my dear friends so I definitely want to ask him.  There'll be different folks than the last one.  But there are a lot of great players.  My wish list is pretty long.  I've written a few things, I actually recorded a piece yesterday."  Steve says it probably won't be ready until the end of the year.


Steve was at the Hall of Fame to help kick off a new exhibit of Gretsch guitars from the collection of rocker Randy Bachman of the Guess Who and Bachman-Turner Overdrive.  Steve said he really loved the collection: "They're like little works of art. Even if someone didn't know guitars, they'd be astounded because they're beautiful.  I want a lot of these guitars badly!" The exhibit, American Sound and Beauty: Guitars from the Bachman-Gretsch Collection, features over 75 guitars, and will continue through July.