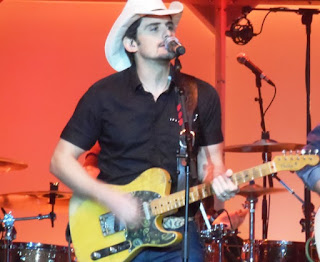 NASHVILLE, Tenn. (January 19, 2016) Country music superstar Brad Paisley will begin the 2016 winter leg of his highly successful “Crushin’ It World Tour,” kicking off this Thursday, January 21 in Jonesboro, AR.  The tour will continue across the United States and Canada during the winter months. Special guests will be breakout country artist Eric Paslay and new country sensation Cam.

Brad Paisley is a critically acclaimed singer, songwriter, guitarist and entertainer whose talents have earned him numerous awards, including three GRAMMYs, two American Music Awards, 14 Academy of Country Music Awards and 14 Country Music Association Awards (including Entertainer of the Year), among many others. He has been a proud member of the Grand Ole Opry since 2001. Paisley has written 20 of his 23 #1 singles with the first being his 1999 hit “He Didn’t Have To Be” and his most recent, “Perfect Storm,” from his chart-topping 2014 album Moonshine in the Trunk. As a continuation of Paisley’s Country Nation College tour presented by Zaxby’s he will perform on January 24 as part of the grand-opening season for The Pavilion, the new home of Ole Miss basketball. Paisley has partnered with Boot Barn® and developed an exclusive line of jeans, hats, T-shirts, jewelry, belts and woven shirts called Moonshine Spirit by Brad Paisley. Connect with Brad at www.BradPaisley.com, www.Facebook.com/BradPaisley, on Twitter @BradPaisley, on Instagram @Brad Paisley, and YouTube at YouTube.com/BradPaisley.

California-born singer/songwriter Cam emerged as one of 2015’s true breakthrough artists, achieving her first Platinum record and first #1 country single with “Burning House,” which earned her a GRAMMY® Award nomination for Best Country Solo Performance. Her Untamed album, released December 11, 2015, debuted at #2 on Billboard’s Top Country Albums chart with the year’s best first-week album sales by a debut country artist.  With each song co-written by Cam, her Untamed album released to widespread critical acclaim from The New York Times, Entertainment Weekly, PEOPLE, AllMusic, the Associated Press, and many others.  Cam has been featured on such programs as Good Morning America, Today, and The Tonight Show, with live performances over the past year including Apple Music Festival 2015 in London, Stagecoach, SXSW, ACM Lifting Lives Party for a Cause, CMA Music Festival, the Grand Ole Opry, and more.  Chosen among CMT’s Next Women of Country, Cam began 2015 on multiple “New Artist to Watch” lists and closed the year with Untamed ranked among 2015’s best country albums by Rolling Stone Country, The Washington Post, and others.  Find her online at www.camcountry.com, on Twitter @camcountry, and on Instagram at https://instagram.com/camcountry/.

More dates to be added, check www.bradpaisley.com for more information.