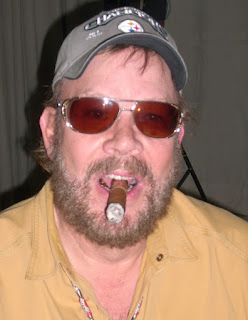 Nothing stands between Hank Williams Jr. and his cigars.  His team had set up a media day for the country legend at a Nashville studio.  The day before it was supposed to happen, everyone received an emergency email, announcing a change of venue.  We got the story from Bocephus himself.  He told us, "There's quite a story about why we're in this studio today.  We were going to another studio, and they told me, 'They don't want you to smoke the cigars there, because it gets into the air handlers.'  And I said, 'Oh that's fine, cause I was goin' home anyway.'  Boy they got that studio changed real quick ladies and gentlemen.  I said that works for me, cause I was goin' anyway.  That's super-true!"

Hank Jr. has built an historic smoking lounge in his home.  He told us, "I just recreated Hank and Audrey's den (from their original Nashville home) with the original pictures of little Randall and I recreated it.  It has the same song titles on the wall, but there's one difference.  On one side is yours truly's song titles.  There's two sides of the room: The Senior side and the Junior side."


Hank went on to tell us he has an idea for his new den. "I said, 'Get ahold of one of them fancy cigar magazines.  If they want to do a story, I can get some pretty big rowdy friends together, and we'll all be sitting here having a little cig on this porch about 30 miles from where Hank & Audrey are buried.'  And they smiled and said, 'I think we can make that happen.'"

Hank Jr. has a lot to celebrate.  This week, he releases a new album called "It's About Time."  It's his first release on the Nash Icon Record Label, and features guest appearances by Eric Church, Brantley Gilbert, Justin Moore, and Brad Paisley.