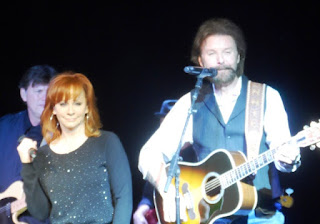 Back when Brooks & Dunn called it quits in 2010, Ronnie Dunn went solo.  He released a couple of albums on his own, and earlier this year, he signed with the NASH Icon record label for a yet-untitled album.  One year ago, it was announced that Brooks & Dunn would reunite for a series of shows in Las Vegas with Reba McEntire.

But Ronnie told Inside Country that if it hadn't been for Reba, he might have retired completely. "It came out of nowhere, I didn't expect it, I was good with retiring on the beach in Cancun at Reba's place with her friends.  It's been a sweet gig. We played all June, and none of us wanted to come home.  So we're going back in December for two weeks, and then next May, and into the next year, and hopefully the next year after that."

Ronnie described the unique show: "The way it's structured, we come out and kind of stage together for long periods of time, it's not just Brooks & Dunn or Reba out there.  We came up with a way to end it.  Great crowds, it's all been sold out, no complaints."

Ronnie spends a lot of time with his friend Reba.  He recently did a charity show with her in Italy: "I was just there in September, this was our second time to do this for the Muhammad Ali Celebrity Fight Night thing.  Andrea Bocelli throws a little soiree in his backyard, and Reba & I are the token country acts."

"Together In Vegas" with Reba & Brooks & Dunn will continue through December 12th at Caesar's Palace in Las Vegas.