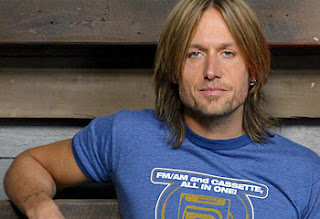 Sad to report that Keith Urban's father, Robert, passed away Saturday night after a long battle with cancer.  Keith released this statement from his publicist:

“I’ve been deeply touched by the outpouring of love and support that Nic and I, and our family, have received since my Dad’s passing on Saturday night,” Keith Urban writes. “His long battle with cancer is now over and he is finally at peace. My Dad’s love of country music and America set me on my life’s journey, and shaped so much of who I am today. Thank you to everyone who has kept us all in your thoughts and prayers.”
The news comes just days after Keith unveiled an exhibit of personal items at the Country Music Hall of Fame & Museum.  That night he credited his father for his love and appreciation of country music.  “My dad always thought it was important that I dress like a performer.  So a lot of the outfits were made by him with my mom.  He thought I should dress well.  And a lot of the competitions I entered also had categories for Best Dressed Male, and I often won that.  Sometimes that was the only thing I won."  In fact the first items in the exhibits were three record albums from his father's collection.

Back in 2002, Keith wrote "Song For Dad" that appeared on his Golden Road album.  He explained the song's inspiration: "For me, I just wanted to write a song to say thanks to my dad, you know? My love for American country music, American cars, American culture, all of that stuff was inherited from my dad. He grew up in the ‘50s and was infected with rock’n roll, like so many kids around the world were in the ‘50s, and that really started it for him. He was in. He was sucked in to the vortex, you know? And I inherited all that stuff, and I loved the fact that I did, because it sent me on my path, and it was where I was supposed to be. So, this song was my way of saying thanks to him."