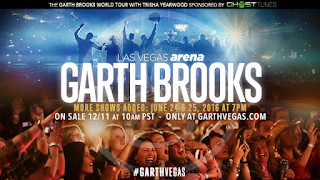 At a press event in Las Vegas the other day, Garth made it clear that his Las Vegas shows – his first in the city since a residency that found him doing recurring occasional acoustic performances a few years ago – will be “stand-alone” events unlike any on his current tour. “Fans that come to Vegas (will) make this an event that will be truly…truly historic for us. It’s going to be epic for us,” he says. “We picked the right city, the right venue, the right people.” 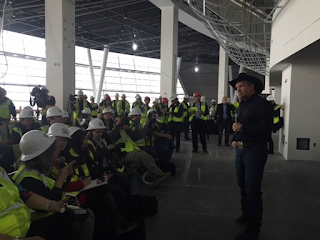 The shows – four concerts, originally announced for July 2, 3 and 4…along with additional shows on June 24 and 25, just announced today – will take place at the entertainment capital’s soon-to-open state-of-the-art 20-thousand seat Las Vegas Arena. “We’re going to bring our A-game in here, and we’re going to expand it,” Garth says. “I can’t imagine a World Tour without Vegas. But if you saw the World Tour two weeks before the Vegas show or two weeks after the Vegas show, it won’t look anything like the Vegas show.”
Tickets for all seven of the Garth Brooks World Tour shows in Las Vegas go onsale to the public this Friday, December 11 (10:00am PT) online at www.garthvegas.com or by phone at 1-844-63GARTH.