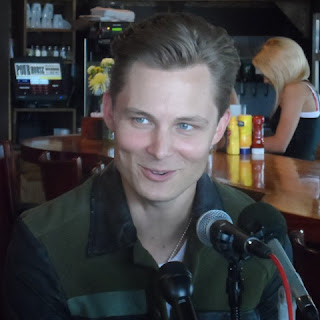 People Exclusive: Frankie Ballard's New Album Can't Get More Country Than This: 'It's That Retreat Mentality' (NEW YORK) - After his breakthrough Sunshine & Whiskey, Frankie Ballard has gone and done something crazy for a country artist. He's recorded his next album in the actual country. As in nowhere-near-Nashville, cruddy-cell-service, see-the-stars-at-night country.  "I knew being in a place where there really wasn't anything else to do but make music would help us to focus ourselves and make the music better," said Ballard, 33. "It's that retreat mentality. You're like at summer camp with your buddies. All you can do is make the music."  The site was Sonic Ranch, a remote studio located in a pecan grove on the Rio Grande just south of El Paso, Texas. Of 14 songs recorded in an intense 10-day marathon, nine appear on the album; two more tracks were re-recorded in Los Angeles. Named for its birthplace, El Rio is set for release June 10.  The location wasn't Ballard's only back-to-roots decision. In search of a new vibe, Ballard and his producer assembled a bare-bones studio band of drums, bass, rhythm guitar, and keyboard, with Ballard on lead guitar. Listeners of the single now getting airplay, "It All Started with a Beer," are getting a first taste of the album's stripped-down country rock that's heavy on vocals and guitar licks and light on production.  "I think it's a new sound," Ballard said during an interview at Warner Music headquarters in Nashville. "It's a sound I've been trying to discover for a long time. ... it's a sound that's going to work in country music. I think country music needs this sound. It's getting back to musicianship and great songs."  Though Ballard co-wrote two of the songs, he describes himself first and foremost as "a recording artist," so he let others do the writing for the remaining nine tracks – including a cover of hero Bob Seger's "You'll Accomp'ny Me." Another instantly recognizable name is Chris Stapleton, who co-wrote two tracks, "Cigarette" and "El Camino."  Back in 2014 and early 2015, when Ballard was selecting his songs, the multiple CMA and ACM award winner was simply known as a successful Nashville songwriter.  "I've known Chris for a long time, maybe six years or so," Ballard said. "I've always been a fan of his ... His recent success proves to me they were good choices to make because people like what he's doing. ... It gives me hope that people will like my version of them."  Kip Moore also shares writing credit with Stapleton on "Cigarette," a song unabashedly about lust that Moore has been successfully performing out on the road. Ballard said he's been getting some pushback from Moore fans over the Internet for its inclusion on the album.  To them, Ballard just wants to say, "you people have no idea how the music business works. ... He didn't put it on his album, and I said, 'Can I have the song?' He said, 'Yeah,' so we recorded it."  With three No. 1 singles already under his belt, Ballard is enjoying playing to crowds who know his music, and he's ready to earn more fans.  "Before you have a hit song," he said, "all you're doing is banging on the door and screaming, 'I've got something I want to play.' ... Now with the hit songs, they're like, 'Okay man, we're listening. Whaddya got for us?' Now my whole show feels different because I feel like I have a captive audience ... It's been fun. It's what I've always wanted – just a real shot at trying to have a voice and trying to make some cool music." ### Must credit People and link to:http://www.people.com/article/frankie-ballard-new-album-el-rio