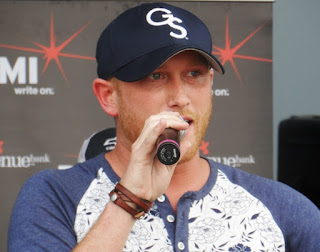 NASHVILLE, Tenn. – (May 3, 2016) – Platinum-selling country star Cole Swindell is celebrating the highly anticipated release of his brand new album You Should Be Here with performances and appearances on Good Morning America May 9th and Fox & Friends May 10th, as well as TODAY and Jimmy Kimmel Live! May 11th.

Kicking off the festivities Sunday night with a powerful performance of his emotional, multi-week No. 1 single “You Should Be Here” on Fox's American Country Countdown Awards, Swindell will be featured in the AUDIENCE network special Cole Swindell Live on AT&T at the iHeartRadio Theater on May 6th. He will also stop at Joe’s Live in Chicago to perform for fans on May 7th, before his sold-out concert at Gramercy Theatre in New York City on May 8th, streaming live to fans via Live Nation.
Swindell has partnered with Shazam to celebrate his new album, as well as for another first-time event. As the first country artist to perform a Shazam session late last year, he most recently joined the platform giant as the first artist ever to engage fans in a nationwide scavenger hunt using their three technologies: audio, visual and geo-locative. Thousands Shazamed photos and songs throughout April to qualify as one of five semi-finalists who will travel to join Swindell for the Shazam Sprint Through New York City, beginning in Times Square May 9th. The sole winner of this round will be awarded an all-expenses paid trip to Nashville during CMA Music Festival this June courtesy of Warner Music Nashville.
The chart-topping singer/songwriter’s new album You Should Be Here, due May 6th on Warner Bros. / Warner Music Nashville, is available for pre-order now. Fans who buy the 12-song collection early, will receive immediate downloads of five songs including “Flatliner” (feat. Dierks Bentley), “Stars,” “Remember Boys,” “Broke Down” and his smash No. 1 hit, “You Should Be Here.”
The lead single and title track of the album, “You Should Be Here” held a four week run on top of  Billboard’s Hot Country Songs chart (tally of digital streams, radio airplay and sales) in addition to its multiple weeks sitting at No. 1 on country airplay charts. It has sold over 550,000 copies, racked up more than 30 million streams and drawn upwards of 15 million YouTube views. The song follows Swindell’s first four consecutive singles as a solo artist (including his latest Gold-certified #1 hit “Let Me See Ya Girl,” along with Platinum-certified mega hits “Hope You Get Lonely Tonight,” “Ain’t Worth The Whiskey” and “Chillin’ It”) and marks his eighth overall as a songwriter. Swindell has sold 1.1 million total album equivalents in the two years since his debut, including 4.5 million tracks and 275 million streams.
For more information and tour dates, please visit www.coleswindell.com and follow @coleswindell on Twitter, @cswinde2 on Instagram and on Facebook.
YOU SHOULD BE HERE TRACK LISTING
1.    Flatliner
2.    Middle Of A Memory
3.    Broke Down
4.    Home Game
5.    Up
6.    Party Wasn’t Over
7.    Stay Downtown
8.    You Should Be Here
9.    Stars
10.  Making My Way To You
11.  No Can Left Behind
12.  Remember Boys