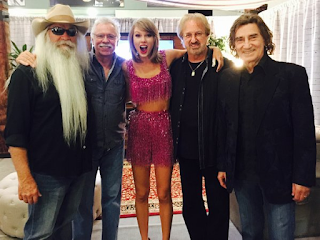 Last week, the Oak Ridge Boys were inducted as the newest members of the Country Music Hall of Fame in Nashville.  But about a week earlier, the world famous quartet sang with Taylor Swift!  It happened in Dallas.  Inside Country spoke with Oaks singer Joe Bonsall on the Hall of Fame red carpet who told us what happened:

"The Oak Ridge Boys were playing the Arlington Music Hall, Taylor was playing the AT&T Stadium for the third sold-out night.  They invited us over, so we finished our show and went to her stadium show.  It was unbelievable.  Afterwards, they had a private reception for us and Taylor and her mom & dad.  I never knew that when she was 8 years old, she lost a singing contest in Reading PA, the first prize was opening for the Oak Ridge Boys at the fair.  And she didn't win, and she was so sad that she didn't win and open for us at the fair.  Here she is, big star, biggest in the world, and she's in the room like a little girl talking to the Oak Ridge Boys.  If we weren't Taylor Swift fans before, we're Swifties now!  She can open for us any time anywhere.  I'd open for her.  I'd carry her guitar case.  I wrote an article about her in Country Weekly years ago, when I first met her at the ACMs.  I wrote that she was going to be more special than everybody else.  I was right."

One week later, the Oak Ridge Boys were inducted into the Country Music Hall of Fame by their longtime friend Kenny Rogers. 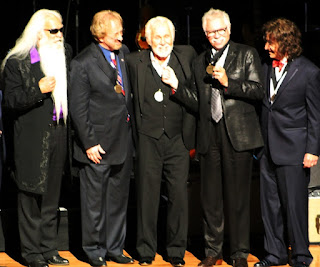