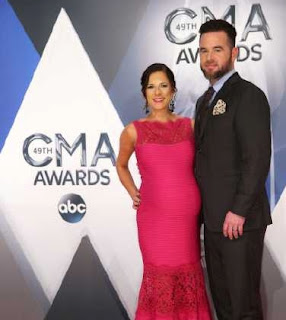 When David Nail and his wife left their house for the CMA Awards Wednesday night, David sent out this Tweet: "Headed down to the CMA Red Carpet with a couple surprises up my sleeve." The "surprises" weren't actually up his sleeve.  He & his wife are expecting twins!  A boy and a girl, and they're due in mid-December, just in time for Christmas.

At the taping for the CMA Country Christmas TV special, David said he was looking forward to spending his first holiday with children:  "It will be the best Christmas that my wife & I have ever had.  It's been a long time in the making, and we're extremely excited, ready to see what God has in store for us.  Hopefully they'll look like their mama and not like me."


Nail's wife Catherine was not the only expectant woman on the red carpet.  Jana Kramer is expecting a girl in January, as well as Shawna Thompson of Thompson Square.  "Speaking for my wife and I, we had no idea any of those people were trying to have children.  In our case it was the good Lord's timing, I guess it just happened to be when other people were practicing themselves.  But I assure you we didn't all get together and say 'Tonight's the night!'"

The news came as a total surprise for people in the music community, who've been more focused on break-up news, rather than growing families.  David explained the reason for keeping his news quiet:  "It was just a long time in the making.  We wanted this, we worked real hard for this, thus keeping it a secret, with twins, any time it's a bit of a high risk, the last thing we wanted was to put out some big fancy press release, and then something unfortunate happen, and go back and revisit it.  So we wanted to wait as long as possible, just for the sake of the babies and my wife.  By no means did we have a grand plan, and say, 'We're lucky, the CMAs are coming up, it's going to be great publicity.'  Just kind of worked out this way.  Trust me, as long as we;ve been working at this, we weren't that good at the timing aspect I assure you."

So have they decided on names yet?  "I will not reveal the names, only because we're not completely sure of those.  I mean, I'm sure, but the wife makes the rules."

In the meantime, David Nail is in the final weeks of the Southern Style Tour with Darius Rucker.  His final show is Saturday November 21st.  Then he'll have the rest of the year off to prepare for being a first time father.