The Big Revival 2015 named Top Package of the Year 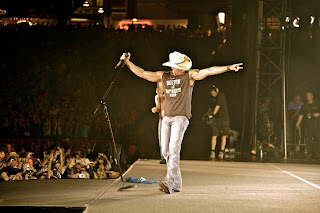 NASHVILLE, Tenn. – (Nov. 19, 2015) – With over a year in the making, Kenny Chesney’s Big Revival 2015 was a tour designed to get him back to the fans in a big way after spending 2014 focusing on music. When the Billboard Touring Awards were given out at the Roosevelt Hotel in New York City, the eight-time Entertainer of the Year received his eighth Billboard Top Package Award.

“We put a lot of thought into every year’s tour,” Chesney said of the honor. “It’s not just about bringing the music out to the No Shoes Nation, though obviously that’s what this relationship has been built on. It’s about how to create an experience every year that stands out, that’s worth remembering, that gives people a chance to love life, love music and have fun.

“This many years in, it’s still a thrill to be recognized for this part of what we do.”

“One of the best things about these tours, especially the stadium shows, is taking out artists who’re starting to make an impact and exposing them to a lot of people,” Chesney says. “It’s like turning your friends onto all kinds of bands – like when you’re young and music and sports is all that matters. Beyond people who’ve become headliners like Luke, Zac and Miranda, the No Shoes Nation got to see people beyond mainstream country, whether it was Grace (Potter), Texas’ Pat Green, (Uncle) Kracker or my buddy Sammy Hagar. Turning people on to great music is one of the coolest things, and it makes putting these packages together something that’s more than just a formula or who’s hot.”

Joining Chesney this year for his mostly stadiums, some arenas and a few amphitheaters Big Revival 2015 Tour were Jason Aldean, Eric Church, Jake Owen, Brantley Gilbert, Old Dominion, Cole Swindell and Chase Rice – as well as Miranda Lambert at Chicago’s Soldier Field, making for quite a package, indeed. Beyond the artists joining him, Chesney’s Big Revival also spawned four straight No. 1s, including the Grammy-nominated “American Kids,” “Til It’s Gone,” “Wild Child,” featuring Grace Potter and the three-week chart-topper, “Save It For A Rainy Day.”

Rolling Stone wrote The Big Revival, “continuously brings a sense of musical energy and emotional urgency...” and Billboard raved it “captures the zeitgeist of American youth in a way that John Mellencamp once owned.” The only country artist on Billboard’s Top 10 Touring Acts of the Last 25 Years worked hard to match that sentiment with his live show this year.