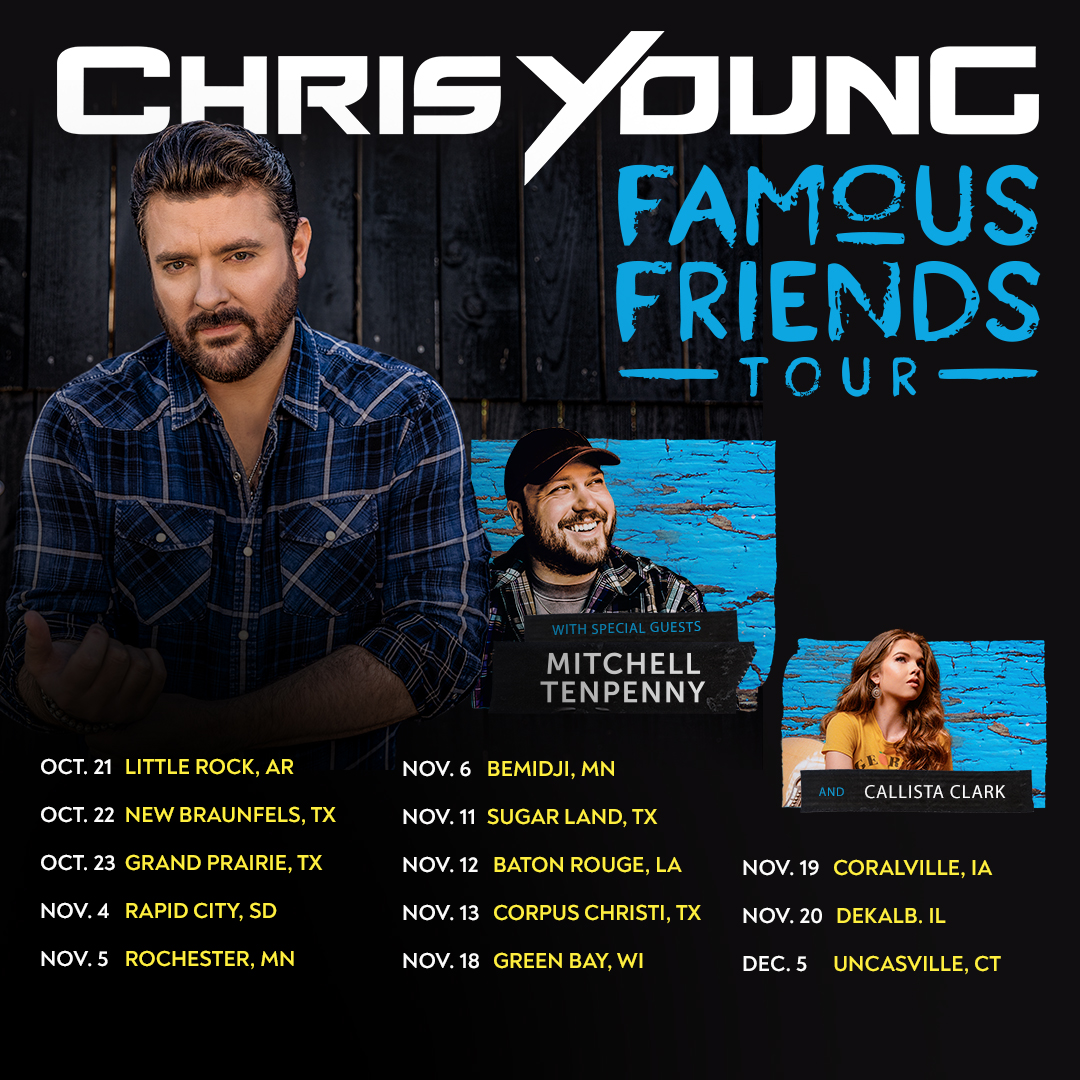 August 2, 2021 – Nashville, TN — Multi-Platinum entertainer Chris Young is excited to return to the road with his headlining “Famous Friends Tour 2021,” playing 13 arena and amphitheater dates October through December. Kicking off October 21 at Little Rock, Arkansas’s First Security Amphitheater, he’ll be joined by special guest Mitchell Tenpenny as direct support along with Callista Clark. Tickets are on-sale beginning Friday, August 6 at chrisyoungcountry.com and all shows will comply with local COVID-19 guidelines.

“Everybody’s been asking me when’s the tour announce - well now you have your answer and I couldn’t be more excited about it,” laughs Chris. “I’m pumped to be able to share some of this new music on tour!”

ABOUT CHRIS YOUNG:
Multi-platinum RCA Records Nashville entertainer Chris Young has accumulated an impressive list of accomplishments, including membership in the iconic Grand Ole Opry, more than 4 Billion on-demand streams, 13 Million singles sold, 12 career No. 1 singles, 21 R.I.A.A. Gold/Platinum/Multi-Platinum certified projects, 2 Grammy nominations, 3 Country Music Association nominations and 4 Academy of Country Music nominations along with wins for Performance of the Year and Collaborative Video of the Year at the CMT Music Awards. These accomplishments and more landed him in the Top 20 of Billboard’s top country artists of the decade.

Named “one of his era’s finest traditionalists” by the Associated Press, Chris is an international ambassador for country music, performing to capacity crowds around the world. With a hit-packed set that highlights his twelve chart-toppers — including back-to-back No. 1s “Losing Sleep,” “Sober Saturday Night,” “Think Of You,” and “I’m Comin’ Over” — the Grammy and ACM nominated vocalist’s 2019 headlining tour played to over 400,000 fans in 3 countries.

For more information and to purchase tickets to the “Famous Friends Tour 2021,” visit chrisyoungcountry.com and join @ChrisYoungMusic and his more than 5.9 Million fans on TikTok, Instagram, Facebook and Twitter.

ABOUT MITCHELL TENPENNY:
Since the release of his debut single, “Drunk Me,” Riser House/Columbia Nashville artist Mitchell Tenpenny has set new standards for breakout success in country music. The 2X Platinum-certified, No. 1 hit that has amassed over 500 million on-demand streams was taken from his introductory 2018 album, Telling All My Secrets, and earned him the best first week showing for any major label country debut LP. Since that time, the “winning” singer (the New York Times) was nominated for New Male Artist of the Year at the ACM Awards and Breakthrough Video (“Drunk Me”) at the CMT Music Awards and saw his “Alcohol You Later” and “Anything She Says” singles certified gold.

Mitchell is set to release a new EP later this summer. Among the tracks to be included on the project is “Truth About You” a song he co-wrote and recently previewed on TikTok. After 2.5 million views in the first 3 days, fans encouraged him to release the song digitally.