Brad Paisley Celebrates July 4th With 350,000 of His Friends 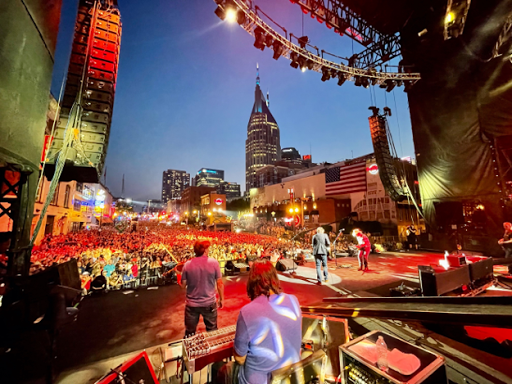 Other Highlights From the Day and Upcoming Appearances

Nashville, Tenn. – Global country music superstar Brad Paisley was overjoyed and emotional as he took the stage last night before a massive crowd of 350,000 people. “What an amazing sight to see this street full of people – to see Nashville coming back!” According to Nashville Convention & Visitors Corp. attendance records were broken.

Paisley properly opened the show with his new song, “City of Music,” a love letter to Nashville and tribute to the pilgrims that have journeyed there. He continued the 90 minute set with several of his #1 singles, fan favorites and some old standards. His first special guest of the evening was Joe Bonamassa, a blues rock guitar master, singer and songwriter. They exchanged amazing guitar riffs on “Old Alabama” and traded verses and solos on Stevie Ray Vaughan’s “Pride and Joy.” Later in the evening country hitmaker and the Grand Ole Opry’s newest member, Kelsea Ballerini, joined Paisley on stage for her hit song, “Hole In The Bottle.” CNN’s Fourth In America aired four of Paisley’s songs live before and during the largest fireworks display in the country.

Paisley started July 4th with an appearance on Sunday TODAY with Willie Geist. From the Ryman Auditorium they discussed returning to perform before a live audience, Nashville’s 4th Celebration, 2021 Tour kicking off and current single, “City of Music.” Watch the interview HERE.

Later in the morning it was announced that Tennessee Governor Bill Lee and Paisley are teaming up to launch “Tennessee on Me” a nationwide campaign to promote Tennessee tourism. “On Me” offers 10,000 free airline vouchers to four key Tennessee airports – Nashville, Memphis, Chattanooga and Knoxville – with purchase of a 2-night stay at TennesseeOnMe.com. Watch the clever promotion HERE.

Next up for Paisley includes an appearance on the Grand Ole Opry tomorrow night, July 6 and