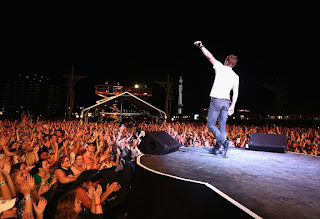 
Highlights from the second day and night included:
·         Lady Antebellum’s Charles Kelly and Eric Paslay joined headliner Dierks Bentley on stage to perform Kelley’s debut solo single, “The Driver.”
·         Lee Brice performed an acoustic version of Eli Young Band’s “Crazy Girl;” which he wrote.
·          Dustin Lynch crowd surfed from the Ram Trucks Main Stage in an inflatable boat while he sang “Where It’s At.”
·         Chris Stapleton performed a duet with his wife, Morgane, as the sunset over the Las Vegas Festival Grounds.
·         ACM CEO Bob Romeo presented Chris Stapleton with his ACM Award for New Male Artist of the Year

·         Lee Brice surprised Ginger Ravella (a military widow and Folds of Honor advocate) with a piece of her past that she never thought she’d ever see again, a truck that had belonged to her fallen husband and sold before his deployment. Ginger was overwhelmed by the gesture and was overcome with tears on stage during the presentation*.

o    Back Story: Last year, Lee performed a benefit concert for Folds of Honor, a non-profit that provides educational scholarships to spouses and children of fallen or disabled veterans. After the performance, Ginger Ravella (a military widow and Folds of Honor advocate) was overcome with emotion and told Lee that his song, ‘I Drive Your Truck’ held a special meaning to her family – it reminded Ginger of her fallen husband, Troy Gilbert, who was forced to sell his 3rd generation family-owned truck before his last deployment. Troy’s F-16 fighter jet crashed in Iraq while trying to save U.S. troops (story here). Immediately, Lee and his manager got digging. After nearly 6 months of cross country searching, Lee and Ginger’s second husband (Jim Ravella) found Troy’s original truck in Phoenix, AZ. They purchased the truck, payed to get it fixed up and shipped it to Las Vegas in time for the ACMs this weekend, where Lee will be surprising Ginger (in the audience) with the truck. To make it better, Troy’s youngest son, Greyson, got his license earlier this month and will be driving his late father’s truck.
·         Multiple checks were presented on behalf of the Academy’s charitable arm, ACM Lifting Lives to beneficiaries of this year’s ACM Party for a Cause Festival including Folds of Honor, Military Warriors Support Foundation, Honor Flight Southland, Navy SEAL Foundation, and Task Force Dagger Foundation.