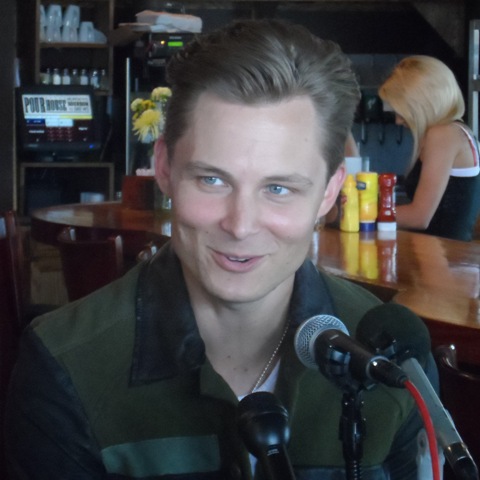 FRANKIE BALLARD DEBUTS NEW MUSIC VIDEO FOR “IT ALL STARTED WITH A BEER”
Singer/songwriter’s current single racing toward Top 25 at radio
NASHVILLE, TN (February 25, 2016) – Warner Bros. Records/Warner Music Nashville’s Frankie Ballard premiered the new music video for his current single “It All Started With A Beer” on RollingStone.com today. The track is a look back at love and happiness that’s grown over time despite the bumps life offers along the way. It starts with a simple acoustic guitar played over a vibey organ line and builds like a couple swirling on the dance floor to one of the Michigan-born Ballard’s laidback guitar solos as he sings “Ain’t it crazy, baby, how we got here/it all started with a beer.”
"I really enjoyed expressing myself visually with this new video,” said Frankie. “I called up some buddies, had a few beers, and shot some cool studio moments. I wanted people to see us playing the song. This new album is all about the music, so I thought, let's show that!"


Coming up next month, Ballard is planning to head overseas to the United Kingdom and Germany. To kick things off, Ballard will make his first stops March 11 and 13 in London for the C2C: Country to Country annual multi-day country music festival. Fans will have a chance to see Ballard performing on the Yamaha Stage and as one of the three official C2C After Show Party artists. The festival takes place each March and, after just two years, has become Europe's largest country music festival, welcoming over 50,000 fans across the weekend.
His forthcoming album due later this year, is currently climbing the radio charts. The project is already creating buzz, with Rolling Stone including it in their “35 Most Anticipated Country Albums of 2016” list.
His previous album, Sunshine & Whiskey, produced three consecutive no. 1 singles – the platinum-certified “Sunshine & Whiskey,” the gold-certified “Helluva Life,” and one of the Top 3 Billboard Country Airplay songs of 2015, “Young & Crazy.”
Frankie Ballard European Tour Dates
3/11 - London, UK, Country to Country Festival
3/13 - London, UK, Country To Country Festival
3/14 - Birmingham, UK, O2 Institute 3
3/15 - Glasgow, UK, King Tut’s Wah Wah Hut
3/16 - Manchester, UK, Deaf Institute
3/17 - London, UK, Hoxton Bar and Kitchen
3/20 - Hamburg, DE, Rock Cafe
3/21 - Berlin, DE, Frannz Club
3/22 - Munich, DE, Backstage
Visit www.FrankieBallard.com for tickets to upcoming shows and more information about new music, and follow @FrankieBallard on Twitter.
Tickets are available now at www.axs.com // www.gigsandtours.com