with Lainey Wilson and Hailey Whitters 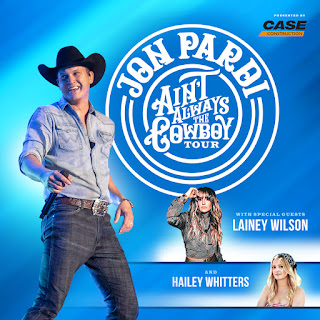 NASHVILLE, Tenn. (February 25, 2022) - CMA and ACM Award-winning singer/songwriter/producer Jon Pardi announced today his Ain’t Always The Cowboy Tour named after his critically acclaimed song of the same name. The tour, presented by CASE Construction Equipment, is set to kick off in Irving, Texas on July 14 and run through October 1 with a headlining show at Nashville’s Ascend Amphitheater. Tickets will be available to purchase HERE beginning March 4 at 10am local venue time.

“I’m really excited to take two great friends and great artists out as openers for the Ain’t Always The Cowboy Tour,” said Pardi. Additionally, he shared with American Songwriter “you get your buddies and put on a good show anywhere people will have you. Indeed, that’s what most heartens.”

Pardi broke the news in his American Songwriter February Issue Cover Story, where he opened up about his new music and his upcoming tour with two of Nashville’s most respected women in country music - Lainey Wilson and Hailey Whitters. Pardi also discussed his new single -the first off of an upcoming project- “Last Night Lonely” telling American Songwriter “What I love most about music is the feelings. They make you dance, cry, have a drink. Fall in love or get the hell out of love. That’s why I love music and why it will always be a part of my life, your life—that’s why we’re here.”

“CASE Construction Equipment has been the ultimate sponsor and partner. As a kid who grew up in construction and agriculture it’s been a dream come true to work with them,” said Pardi. “I’m really excited about continuing this great partnership and having them on board for the Ain’t Always The Cowboy Tour.”

Pardi’s tour announcement comes after last week’s first look at his highly anticipated upcoming studio release with “Last Night Lonely.” The fiddle and steel-drenched track further etches Pardi’s “long-lasting mark on the genre” (MusicRow), following his critically acclaimed third album, Heartache Medication. Nominated for Album of the Year by both the CMA and ACM, Heartache Medication was named one of Rolling Stone’s Best Country Albums of 2019 while standing as the only country album on the Los Angeles Times “Best Albums of the Year” list. With an impressive ability to carve his own path proving “the kind of country music multiple generations came to know, and love can still work on a mass scale” (Variety), Pardi’s instantly identifiable twang, fiddle, and steel guitars “apply new ideas to country’s old sounds” (Los Angeles Times). Lauded as a “hero in the making” (Variety), he continues to “bring authenticity back into Country music” (People).