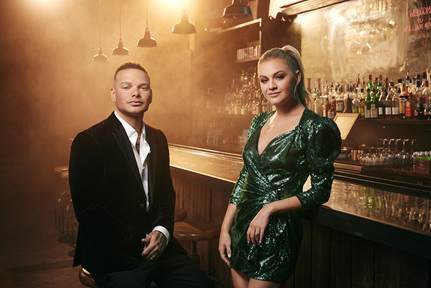 “Kelsea and Kane are two of the brightest, most sought-after stars in country music today and we’re thrilled to welcome them both as hosts of the 2021 CMT Music Awards,” shared CMT producers. “This dynamic duo reflects the show’s revitalized energy as live music returns to center stage in a night filled with incredible outdoor performances, cross-genre collaborations and a few surprises!”

Ballerini adds: “I’m so excited to be hosting the 2021 CMT Music Awards with Kane! The CMT Awards are so special because they are truly fan voted. Following a year plus where we have not been able to be with the fans and share music together, will make this night even more special.”

Shared Brown: "I loved getting a chance to host the CMT Music Awards last year and I'm excited to be back this year with Kelsea. The CMT Music Awards are special to me – it’s the first industry award I won and getting on that stage was an amazing feeling. I love that the fans get to have their voices heard as we celebrate the best in country music.”

Nominations for the “2021 CMT Music Awards” will be announced tomorrow, Thursday, May 13th at 11a/10c, in tandem with the start of fan voting at vote.cmt.com. Voting will run through Tuesday, June 1st at 12p/11c. Performers and presenters will be announced at a later date.

About Kelsea Ballerini:
Kelsea Ballerini is recognized as one of the most influential women in country music today and has consistently made history since the start of her career. Following the release of her debut album, she became the only female country artist to hit #1 with the first three consecutive singles from a debut album. She has platinum and gold album certifications, a career total of eleven gold and platinum singles certifications and has accumulated total streams exceeding 3 billion to date. Ballerini has garnered two GRAMMY® Award nominations, won two ACM Awards and has also received multiple career nominations from the ACM Awards, American Music Awards, CMA Awards, CMT Awards and the People’s Choice Awards. Most recently, she received a 2021 ACM Award nomination for “Female Artist of the Year” and was also welcomed as the Grand Ole Opry's youngest current member.

Kelsea Ballerini released two acclaimed albums in lockdown last year. In March of 2020, she debuted her self-titled third album kelsea (Black River Entertainment). Her most personal effort to date, the album was met with critical praise, including from NPR who opined, “Kelsea Ballerini is definitely one of the most influential women in country right now… she’s defining the sound of the genre.” The debut single from the album, “homecoming queen?”, which the New York Times deemed “excellent,” was certified platinum, marking her fastest single to achieve this milestone yet. Her third single from the album, “hole in the bottle” recently reached Gold RIAA certification and earned Kelsea her sixth #1. Her latest single from the release, “half of my hometown” features a special guest vocal appearance from eight-time Entertainer of the Year and fellow East Tennessee songwriter/superstar Kenny Chesney. While under quarantine, Ballerini created the second half of that story, ballerini. On this album, she carefully deconstructed each song from the kelsea album and re-recorded everything with minimal accompaniment. Co-producing the release, Ballerini showed another side of herself with this reimagined take, highlighting the lyrical power of kelsea as she stripped all of the songs down to the bare essentials.

About Kane Brown:
Noted as the “future of Country” (Billboard) and one of “31 People Changing the South” (Time), the chart-topping entertainer recently earned his first ACM Album of the Year nomination for Mixtape Vol. 1, as well as a Video of the Year win for his anthem “Worldwide Beautiful.” Brown first broke through the country charts with his #1 self-titled debut, which spent 13 weeks at the top of the chart and made Brown the first artist in Billboard history to Top all 5 Billboard Country charts simultaneously. That same year Brown earned three AMA Awards and produced two of the most streamed country songs of all time--the 7X platinum #1 hits “Heaven” and “What Ifs.” Brown’s sophomore album Experiment debuted #1 on the Billboard 200 all-genre chart and solidified Brown as the only male country artist in more than 24 years to debut at the top of the Billboard 200. Experiment produced back-to-back #1 hits and was ranked by The New York Times as one of the Top 10 Best Albums of the Year. His latest project, Mixtape Vol. 1 features Brown’s Top 10 pop radio hit “Be Like That” featuring Khalid and Swae Lee, his co-written duet “Last Time I Say Sorry” with John Legend, and his current hit at Country radio “Worship You.” Brown recently announced his Blessed & Free Tour, where he will headline all the NBA arenas in one tour-a first in music. Blessed & Free marks the first tour for Brown since his Worldwide Beautiful Tour, which earned critical praise during its international run.