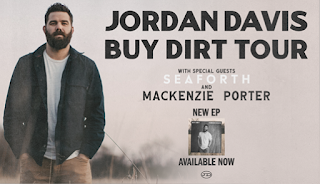 NASHVILLE, Tenn. (May 27, 2021) – MCA Nashville’s Jordan Davis announced his headlining Buy Dirt Tour today. Slated to kick off September 9 in Minneapolis, Davis will hit the stage in venues around the country, performing songs from his just-released Buy Dirt EP. Davis will be joined on the 17-city tour by special guests Seaforth and Mackenzie Porter. Tickets are available HERE.

Davis gave fans a sneak-peak of his upcoming tour during his Buy Dirt Livestream, which aired yesterday on YouTube, Facebook, & Tik Tok.

“This (Exit/In) is where I played my first Nashville full band show,” says Davis. “This place is super special and super woven into the Nashville music scene. COVID hurt a lot of these small music venues and I wanted to help bring shows back and get us back on the road.”

The Shreveport native played his brand-new EP front to back from Nashville’s famed Exit/In and held a fan Q&A following the performance. Seaforth and MacKenzie Porter joined him during the performance, and an option to donate was available during the livestream benefitting Music Venue Alliance Nashville. Additionally, Davis will make a very special appearance on NBC’s 3rd hour of TODAY June 1st, performing “Buy Dirt” with country superstar Luke Bryan. Davis’ latest single “Almost Maybes” is currently Top 10 and climbing on the country radio charts.

* Support from Seaforth and MacKenzie Porter

About Jordan Davis
MCA Nashville’s Jordan Davis has been named an “Artist to Watch” by Billboard, Rolling Stone, CMT, Pandora, Shazam, Amazon Music, Sounds Like Nashville, The Tennessean, SiriusXM, Whiskey Riff, and more. A Native of Shreveport, Louisiana, Davis graduated from LSU and briefly pursued the path of his degree working as an environmental consultant; however, his passion for music and songwriting eventually compelled him to move to Nashville in the summer of 2012. In 2018, Davis released his Gold-certified debut album, Home State, which features his three consecutive No. 1 hits: Platinum-Certified “Slow Dance In A Parking Lot,” the Double Platinum-Certified “Singles You Up” and Platinum-Certified “Take It From Me.” In 2019 Davis won Best New Country Artist at the iHeart Radio Music Awards and was a two-time nominee for ACM New Male Artist of the Year. He was also named Billboard’s Top New Country Artist of 2018 as well as Country Aircheck/Mediabase’s Most Heard New Artist of 2018. Davis has since accumulated over 2 billion streams worldwide. The hitmaker released a six-song, self-titled EP featuring a collaboration with pop superstar Julia Michaels titled, “Cool Anymore.” Davis has made appearances on Good Morning America, Late Night with Seth Meyers, TODAY Show, and has previously toured with the likes of Rascal Flatts, Jake Owen, Kip Moore, Brett Young and Old Dominion.