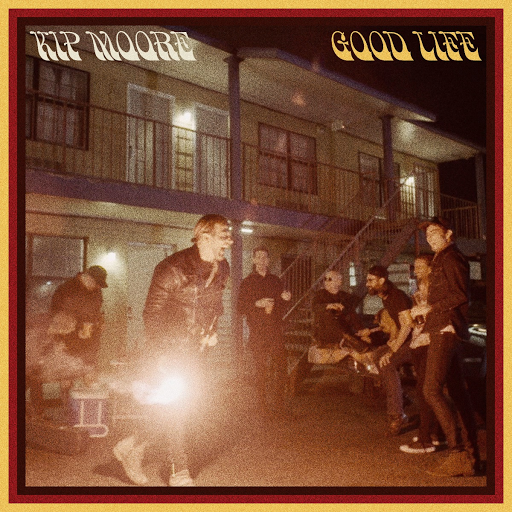 Multi-PLATINUM Singer/Songwriter Joined Forces In The Studio With Acclaimed Producer Jay Joyce On The Feel-Good Track Arriving At Country Radio Today And Available To Stream Now
Nashville, TN - April 23, 2021 - Multi-PLATINUM singer/songwriter Kip Moore dropped a brand new single, “Good Life," available to listen here and arriving at Country Radio today. Stepping into the studio for the first time with renowned producer Jay Joyce (Eric Church, Miranda Lambert, Keith Urban), the new track sees Moore shift gears sonically for the windows-down, volume-up anthem. Co-written by Moore with Dan Couch and Joyce, "Good Life” embodies a snappy self awareness and an appreciation for living in the moment, with a soul-driven groove. The track is the first single taken from Moore’s fifth studio album, and offers a look into a new upcoming chapter from the critically-acclaimed singer/songwriter.

"I haven’t been this fired up about new music in a good while,” shared Moore. "I’m always trying to push myself out of any comfort zones that I may have settled into during the previous project, and I think working with Jay definitely helped me with that. I wrote this song and many more while surfing this past winter and I can’t wait for the fans to hear what’s coming."

Moore’s new single “Good Life” follows the resounding acclaim garnered for his fourth studio album, WILD WORLD. The set, co-written and co-produced by Moore, was spotlighted by critics as “especially vital; occasionally, even rare,” (Esquire) and spawned his most recent Top 15 single, “She’s Mine.” "When programmed beats and pop-influenced country is the sound of the moment, Moore’s heartland country-rock songs with his growling voice feel muscular, nostalgic and honest” declared Associated Press.

Known as “one of country’s more thoughtful artists” (Billboard) Moore has toured the world earning acclaim and a rabid fanbase as an all-in performer in each setting, consistently selling out headlining shows internationally with huge followings in The U.S, The U.K, Europe, Australia and Canada. Praised by Noisey as “an uncompromising, genre-defying artist firing on all cylinders” Moore has blazed his own trail, with “a bit more Southern rock than traditional country… to be a Kip Moore fan suddenly became a marker of your having a certain refinement in your country-music taste” (Chicago Tribune). The CMA “International Artist Achievement Award” nominee first splashed into the mainstream with the double-PLATINUM “Somethin’ ‘Bout a Truck” in 2012, then followed up with three more best selling No. Ones (“Hey Pretty Girl,” “Beer Money” and “More Girls Like You”), a trio of ambitious, critically-praised albums and two gritty EPs that landed Moore on multiple “Best Of” lists. For more information visit kipmoore.net.