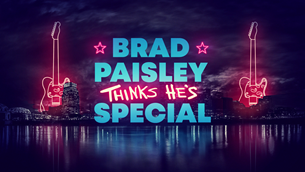 
“I am so excited for Brad to be able to turn this fun, down-home country idea into a reality on ABC,” said Rob Mills, senior vice president, Alternative Series, Specials & Late Night, ABC Entertainment. “We all know him as an award-winning country superstar, and now we get the chance to see his comedic talents as he brings this variety special to life with the help of an incredible roster of A-list talent.”


“We’re so excited to be working with one of our great Sony music artists on such a distinctive new format. Brad has brought so much creativity, heart, comedy and celebrity wattage to this hour, we can’t wait for everyone to see it,” said Holly Jacobs, EVP, Alternative & Syndication Programming, Sony Pictures Television.


Brad Paisley is a critically acclaimed singer, songwriter, guitarist and entertainer whose talents have earned him numerous awards, including three GRAMMYs, two American Music Awards, 14 Academy of Country Music Awards and 14 Country Music Association Awards (including Entertainer of the Year), among many others. He has been a proud member of the Grand Ole Opry since 2001. Paisley has written 21 of his 24 No. 1 hits and has accumulated over 20 million career total worldwide album sales, track downloads and streaming equivalents. Paisley’s 2019 World Tour heads to Europe next month after traveling across the U.S. throughout this past summer.   Paisley is involved with a successful ongoing multiyear ad campaign with NationwideÒ Insurance, along with Peyton Manning. Paisley and his wife, Kimberly Williams-Paisley, are co-founders of a nonprofit organization called The Store, a free referral-based grocery store, which aims to empower low-income individuals and families in the Nashville area. Go to www.thestore.org for more information. Paisley has partnered with Boot Barn® and developed an exclusive line of jeans, hats, T-shirts, jewelry, belts and woven shirts called Moonshine Spirit by Brad Paisley. Connect with Brad at www.BradPaisley.com, on FaceBook @BradPaisley, on Twitter @BradPaisley, on Instagram @Brad Paisley and YouTube at YouTube.com/BradPaisley.

ABC Entertainment airs compelling programming across all day parts, including “Grey’s Anatomy,” the longest-running medical drama in prime-time television; riveting dramas “The Good Doctor,” “How to Get Away with Murder,” “A Million Little Things” and “Station 19”; the Emmy® Award-winning “Modern Family” and trailblazing comedy favorites “American Housewife,” “black-ish,” “Bless This Mess,” “The Conners,” “The Goldbergs,” and “Schooled”; the popular “Summer Fun & Games” programming block, including “Card Sharks,” “Celebrity Family Feud,” “Holey Moley” and “Press Your Luck”; star-making sensation “American Idol”; reality phenomenon “Shark Tank”; “The Bachelor” franchise; long-running hits “Dancing with the Stars” and “America’s Funniest Home Videos”; “General Hospital,” which has aired for more than 55 years on the network; and late-night talk show “Jimmy Kimmel Live!”; as well as the critically acclaimed hit special ”Live in Front of a Studio Audience: Norman Lear’s ‘All in the Family’ and ‘The Jeffersons.’” The network also boasts some of television’s most prestigious awards shows, including “The Oscars®,” “The CMA Awards” and the “American Music Awards.”


ABC programming can also be viewed on ABC.com, the ABC app and Hulu.