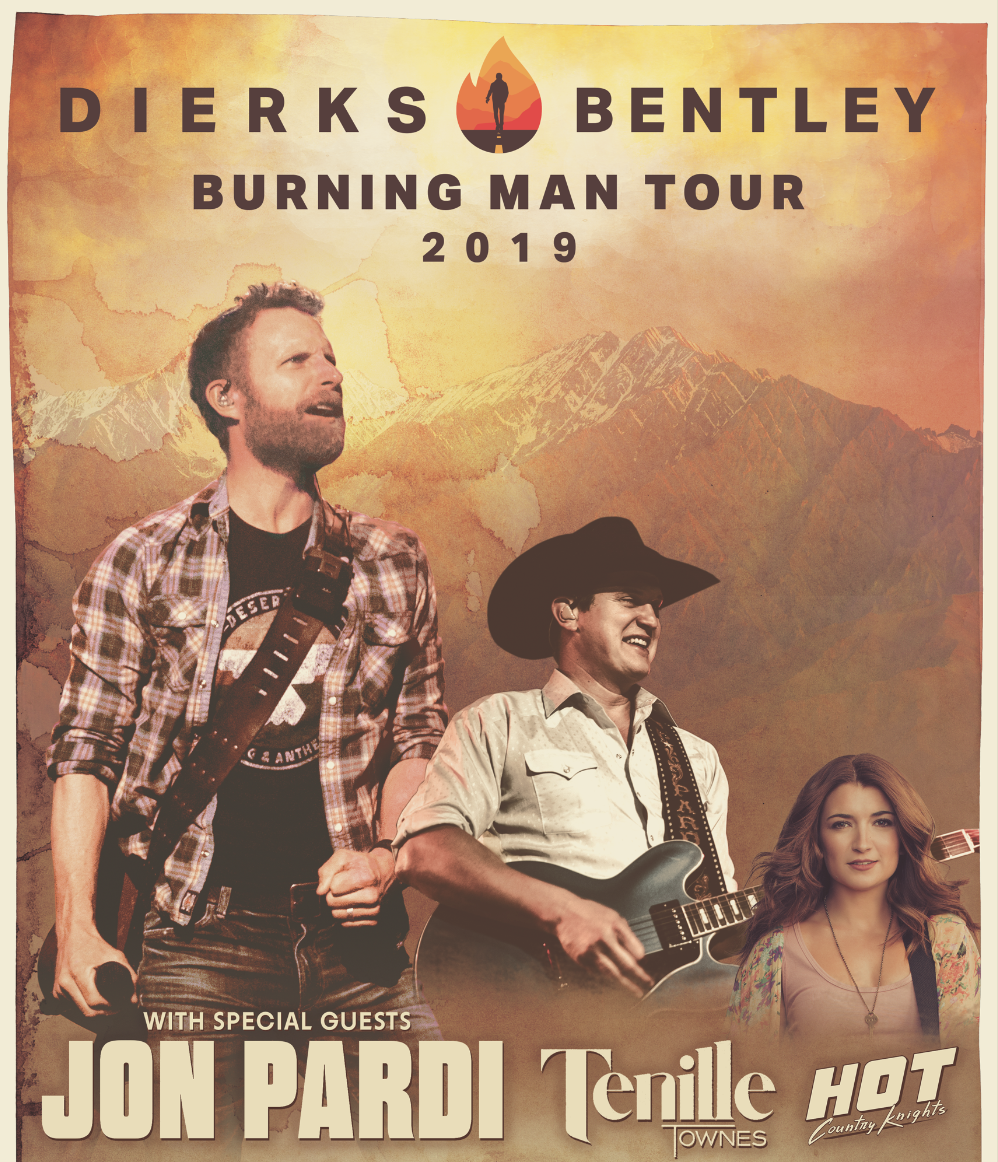 
Nearly 25 Cities Across the US and Canada Will Feature Special Guests Jon Pardi, Tenille Townes and the Hot Country Knights


On Sales Begin Next Friday (11/2), Including Nashville’s Bridgestone Arena


NASHVILLE, TN - Oct. 26, 2018 - Current three-time CMA nominee Dierks Bentley announced today that his 2019 BURNING MAN TOUR will kick off on January 17th in Hamilton, ON, CAN with special guests Jon Pardi, Tenille Townes and Hot Country Knights. Bentley is known to "pull out all the stops, not quitting until the crowd is whipped into a frothy frenzy” (On Milwaukee) and will continue to do so in 2019 with the run named after his "most affecting song” (Rolling Stone) and hit single “Burning Man" feat. Brothers Osborne. Live Nation is the official tour promoter. Citi® is the official pre-sale credit card of the tour. As such, Citi® cardmembers will have access to purchase pre-sale tickets beginning October 31st  through Citi’s Private Pass® program. For complete pre-sale details visit www.citiprivatepass.com. Initial public on-sales are scheduled for Friday, Nov. 2 beginning at 10:00A local time via www.dierks.com and www.livenation.com, where additional dates will be announced in the coming weeks.

“I talked to Jon Pardi last April about the idea of going back on the road together one last time, and I am so happy that I can finally let our fans in on this,” said Bentley. “I’m still coming off the high of playing Hollywood Bowl and the last tour, but knowing that this Burning Man Tour with Pardi was out there waiting has been so awesome. We cannot wait to get back on the road!”

Bentley adds, “Who we bring with us on tour is so important to the band, crew and me and the addition of Tenille Townes is something we are all stoked about. Our hardcore fans are aware of the 90s country cover band, the Hot Country Knights, who have been following us around and opening shows.They talked us into having them on the actual billing for this tour...hope their van has snow tires for Canada!”

Bentley’s live show has long been applauded by critics who mirror the capacity crowds’ enthusiasm, noting Bentley's "arena strutting rockers and stripped down mountain music" (Charlotte Observer) blend with state-of-the-art visual production. As he "continues to be a crowd favorite" (Kansas City Star), Bentley will make notable stops throughout the country including his return to Nashville’s Bridgestone Arena after making a sold-out headlining debut in 2016.

The multi-PLATINUM singer/songwriter “has one of Country music’s most enviable brands, equal parts affability and authenticity” (Forbes). Reaching a new creative high while "making music designed to challenge" (New York Times), Bentley co-wrote 10 of his current album THE MOUNTAIN’s (Capitol Records Nashville) 13 tracks, which earned him the highest debut sales  of his career and became his seventh chart-topping album. Bentley has amassed 17 career No. Ones, billions of digital streams, countless nominations from the  ACMs, Billboard Music Awards and more while earning 13  GRAMMY  nominations – including at least one stemming from each of his last six albums. Bentley continues with his endeavors outside of the music industry by partnering with Flag & Anthem to create an exclusive lifestyle collection, Desert Son, and with four Dierks Bentley’s Whiskey Row locations throughout the country. For more information visit www.Dierks.com.