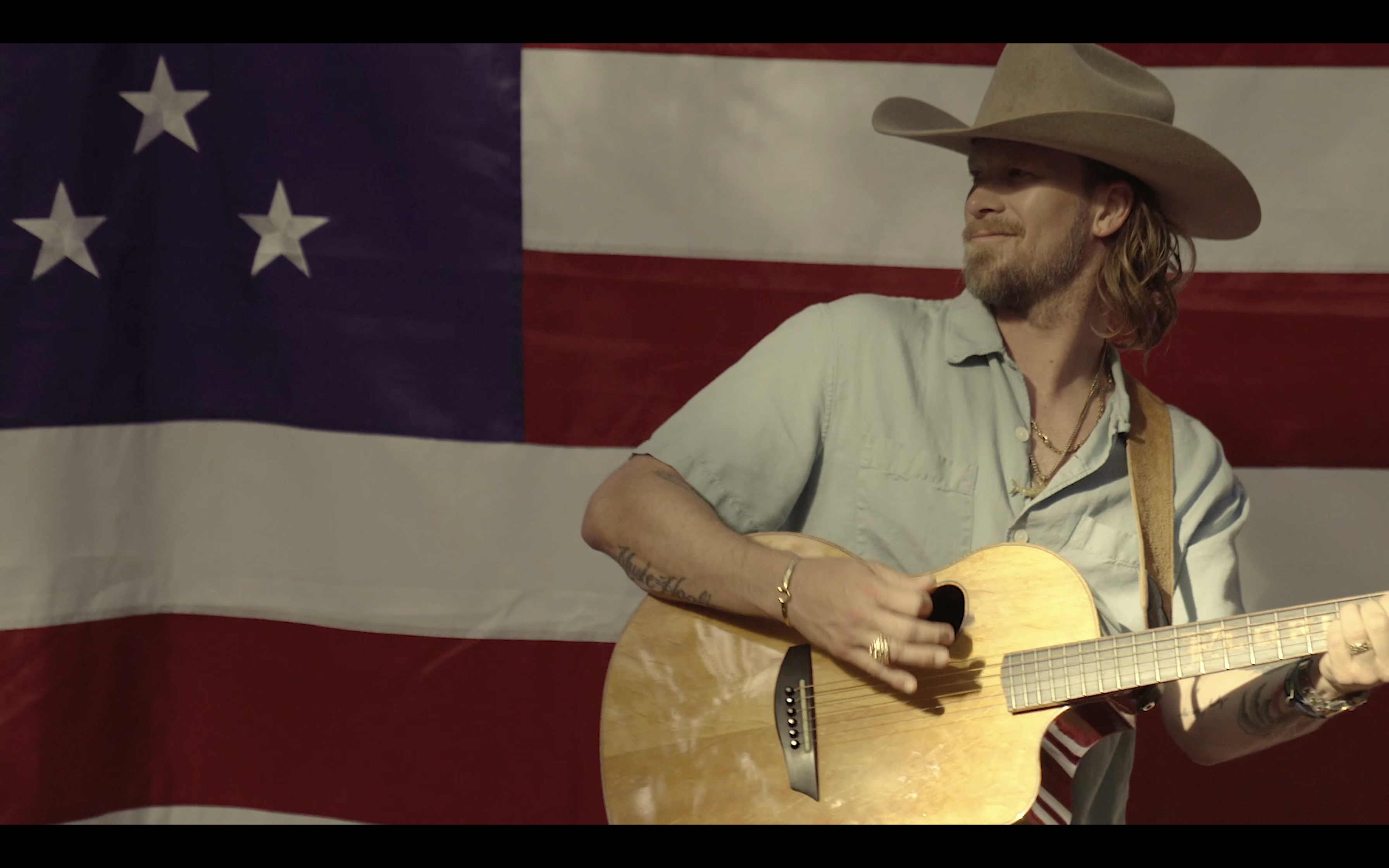 NASHVILLE, TN (July 15, 2022) — DIAMOND-selling superstar Brian Kelley brings the tried-and-true heart of patriotic pride in his “American Spirit” music video – watch here. Director Ben Christensen captured freedom-flying clips during the annual Grayton Beach Parade in Florida with many celebrating the red, white, and blue on Independence Day.“We wanted to capture the energy and spirit of Fourth of July at home in Florida. The parade grows every year in Grayton Beach, and the celebration on the beach gets even more fun!” shares Kelley. “Our friends always set up a huge flag in front of their driveway, so during the afternoon when everyone was at the beach, we did one quick performance shot for this music video to tie it all in with the great footage we captured of families and friends celebrating, soaking up the Florida sun, and giving thanks to our service members. I just love our town – good times, good vibez, and good people.”From the American flag-filled beaches to the star-spangled parade, the hometown footage brings Kelley’s lyrics to life as “That American spirit runs in our blood.” Kelley and Jake Rose produced his first solo release for Big Machine Records, which they co-wrote alongside Blake Redferrin and Canaan Smith. Mixing Kelley’s signature easygoing style with a genuine admiration for the nation he loves while respecting those who protect it, “American Spirit” serves as a timely salute to the ideals of freedom, bravery, and honor – especially everyone who joins the hitmaker in holding them dear.Further embracing his community, Kelley’s been hosting his first-ever Surf Post Sessions live from the backyard of the Tribe Kelley Surf Post in Grayton Beach. Sponsored by local veteran-owned small business 30A Blaze, he just added a fifth SOLD-OUT show this Sunday (7/17) due to high-demand, as every show so far this month has reached capacity including tonight's (7/15) event. The Tribe Kelley Surf Post is run by Kelley and his wife Brittney, which is fully stocked with Tribe Kelley brand items.Next Friday (7/22), the former college baseball player will jet to Atlanta, GA, to headline the CMT Hot Prospects summer concert series at The Battery Atlanta. Playing a FREE pregame concert for fans of the 2021 World Series champions, Kelley will perform on the Georgia Power Pavilion stage ahead of a Los Angeles Angels vs. Atlanta Braves game. He’ll also reprise his appearance at the top of the game inside Truist Park. Tickets and additional details can be found here.
KEEP UP WITH BRIAN KELLEY
WEBSITE | INSTAGRAM | TWITTER | FACEBOOK | YOUTUBE# # #
ABOUT BRIAN KELLEY: Best known as the Florida half of the record-setting superstar duo Florida Georgia Line, Ormond Beach-native Brian Kelley is embarking on a sandy solo adventure with Big Machine Records. With “American Spirit” as his first solo release, the patriotic anthem offers a tribute to one of the nation’s sacred symbols and brave defenders who honor it with their service. This marks new music for the history-making artist-songwriter who debuted solo effort SUNSHINE STATE OF MIND in 2021, and made a splash with sold-out audiences on his MADE BY THE WATER TOUR, as the chill-Country champion captures his lifelong connection to the Florida coast. Co-writing and co-producing the project alongside Corey Crowder for an elevated version of his typical party-ready FGL energy, the set matches Kelley’s anything-goes ethos with a new sunshine-Country strut. It’s the latest piece of a creative empire which has already made Kelley and his FGL partner, Tyler Hubbard, one of the best-selling Country duos in history and true business moguls. Alongside a chart-topping catalog boasting 2020’s LIFE ROLLS ON (BMLG Records), 19 career #1 hits, and being the only act to achieve two RIAA DIAMOND-certified singles in Country music history (“Cruise” and “Meant to Be” with Bebe Rexha), the pair maintain thriving business initiatives like FGL House, plus a reputation as electrifying, stadium-thrilling headline performers. Diversifying his enterprise, Kelley is also hands-on with projects like MAY WE ALL: A NEW COUNTRY MUSICAL with his production company CuzBro Productions, and a partnership with Oyster City Brewing Company. In addition, his collaborations with wife Brittney include cult-favorite brand Tribe Kelley and limited NFT collection, Chill Cowboy Country Club (CCCC).